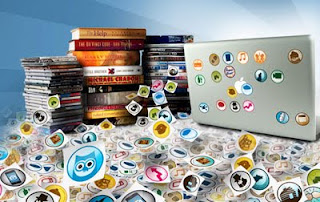 Recently I discovered GetGlue after a work buddy of mine told me I should check it out. A lot has been written already, but I had never heard about it until a couple of days ago. The press call it the thing to look out for in 2011 and it is already quite big. The site already has more than 700,000 users and there are already 10M check-ins each month. Quite impressive for a startup.

Alright, what is it?
Before I tell you what I think about it, let’s explore it. So, what is GetGlue? In short, it’s a hot new social networking site that lets you checking into entertainment. Where Foursquare lets you check into places, GetGlue lets you check into about anything that keeps you entertained. Movies, books, music, actors, artists and even topics you’re thinking about. You can also check into restaurants, but at the time of writing there enough restaurants to make this really useful.

The whole concept is similar to that of a big game. You check into the things you like, you rate some items here and there and before you know it, you earned your first achievement, or “sticker” as it’s called in GetGlue. These stickers can be earned in several ways. You can earn stickers for installing a toolbar in Firefox, checking into special tv-shows, adding enough stuff to your “like” list and the list goes on and on… You even get a sticker for writing certain comments when checking in.

When you’ve just started using it, there isn’t much in your list. To get you started, launching the quick rate will get you a list you can rate. Rating these will generate new suggestions which you can rate as well. Checking into these things you like and reviewing them will give you points. Earning enough points will eventually get you into the status of Fan or even Guru. Being a Guru means you can create new items and improve existing items in GetGlue.

Now comes the great part for the collectors: when you’ve earned enough stickers, you can get those physically mailed to you. And they look pretty cool actually. This makes it actually worth to earn those achievements.

What’s fun about GetGlue that you get to discover new stuff based on the things you have rated. It might be a book that you haven’t tried yet or a movie you didn’t know if it would be right for you. The more you rate and check-in, the more you get to discover. Your friends, who might be from Facebook or Twitter, can also see your suggestions and might want to try those too.

After using it for a few days I have to say I like GetGlue. It’s fun, as well as addictive. It can really get you to try new things you normally wouldn’t. Definitely some great potential to be the next big thing after Foursquare.

Check it out at http://www.getglue.com Why I started cleaning and deleting some of my accounts and (Social Media) services. (and why I am not done yet) delete-300x300.jpgI don't know why exactly August 7th had to be the day, but I had bee…